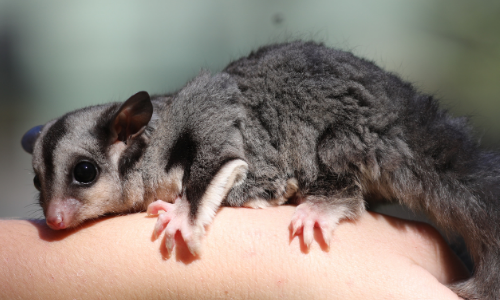 Squirrel Gliders are listed as: vulnerable in NSW, threatened in Victoria, endangered in South Australia and common in Queensland.

The main threats facing Squirrel Gliders today stem from the fragmentation of their habitat. Coupled with this the loss of trees with suitable hollows for nesting and the loss of food sources contained in the flowering mid story shrubs, has compounded threats to their habitats.

Barbed wire fences have also contributed to their demise especially when gliding. Additionally attacks by feral cats have accounted for high losses in Squirrel Glider numbers. If you do own a cat, please ensure it is kept inside at night or is fitted with some large bells to allow possums to escape from these hunters.

Being arboreal, Squirrel gliders are very adept at climbing. They are rarely found on the ground and are able to glide from limb to limb of trees using the membranes of skin that stretches between their front and back legs. They have been observed to glide up to 100 metres with the assistance of a downhill slope and up to 50 metres over flatter terrain. To steer and maintain stability, the curvature of either the left or right membrane can be varied. As they approach to land, Squirrel Gliders bring their hind legs closer to their body, make an upward swoop and land on some bark on all fours.

The Squirrel Glider has a preference for wet and dry sclerophyll forests and woodlands. While they are often found in the drier forest areas, in some areas of Queensland they prefer wetter forest areas bordering on rainforest. The most common vegetation areas where they can be found are usually charactised by one or more species of iron-barked eucalypts. Squirrel Gliders take shelter in tree hollows during the day and will come out only at night. Large light sensitive eyes allow for increased night vision. Movement along branches is in small bounds. They have been known to freeze or hide when detected by a spotlight.

When the species was first described in 1792, it was given the species name norfolcensis, named in the belief that the Squirrel Glider originated from Norfolk Island. This was incorrect. Being arboreal, the Squirrel Glider can be found along the Great Dividing Range from central Cape York, Queensland south to central Victoria with some isolated pockets in eastern South Australia.

Squirrel Gliders are omnivores who feed at night. They live primarily on insects (mainly caterpillars, beetles and stick insects) but also on pollen and nectar (mostly from eucalypts). Plant exudates such as sap or resin from wattle and eucalypt trees, are similarly an important part of a Squirrel Glider’s diet. Obtaining food from any one of these sources usually depends on seasonal influences. 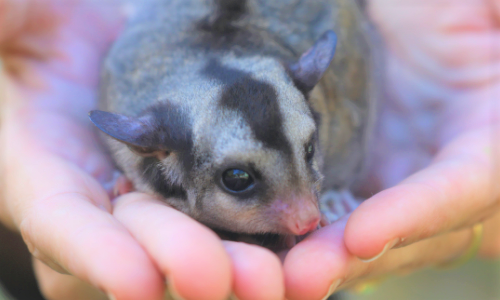 The ability to breed is usually reached around 12 months of age. For males, a scent gland is present on the top of their head. It is found in the middle of the dark strip of fur that extends from the nose to the middle of the back.

Nests are bowl-shaped, lined with leaves and found in tree hollows.

A typical family group consists of one mature male (over two years of age) and one or two mature females with their offspring. The numbers can increase to up to five adults with the inclusion of one or two young males (not more than two years old) to the group. In total there can be up to ten members in a family group.

Squirrel Gliders were devastatingly impacted by the 2020 bushfire season and subsequent drought. They’re also under threat from the feral predator plague faced in Australia. Ultimately, Squirrel Gliders are in need of protection now.  Reasons for their population decline include:

Aussie Ark, established ten years ago, has been working towards rewilding Australia by returning missing species and rebuilding Australian ecosystems. The conservation organisation is committed to returning their sanctuaries to that of pre – European settlement. Aussie Ark will help Squirrel Gliders by creating a robust insurance population, to ensure a long-term future.

You can help support this species’ future by donating today.