Posted at 11:23h in Species by Craig Clark 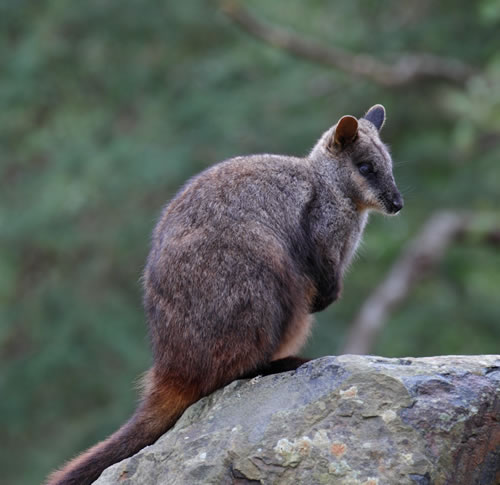 A small and muscular macropod, the Brush-tailed rock-wallaby is known for its long and bushy tail, white cheek stripe and black stripe from its forehead to the back of its head.

The Brush-tailed rock-wallaby is found from South-Eastern Queensland to Western Victoria, roughly following the line of the Great Dividing Range. Their range has significantly declined, leaving remaining populations fragmented and vulnerable to further catastrophe. They inhabit rocky escarpments, outcrops and cliffs with a preference for complex structures with fissures, caves and ledges, often facing north.

Foraging areas may include forests, woodlands and pastures. The Brush-tailed rock-wallaby has a mixed diet: grass is the main item, but flowers, forbs, leaves, fruit, bark and fungi are also eaten.

Threats to the Brush-tailed rock-wallaby are varied but include predation by foxes, cats and wild dogs, competition with feral goats as well as pigs, degradation and fragmentation of habitat, fire regimes that reduce the abundance and diversity of ground forage and infestation by invasive weeds causing loss.

The population of wild Brush-tailed rock-wallabies is in decline – with less than 20,000 expected to be left in the wild and as little as under 10 in some fragmented populations.

Aussie Ark is protecting the habitat of this unique wallaby on Aussie Ark’s sites by removing and managing stock and feral herbivores, conserving native vegetation, managing fire and controlling feral predators. We have completed the construction of our 400Ha sanctuary that our Brush-tailed rock-wallabies will eventually call home, protected from predation. Aussie Ark’s team is working around the clock to build a robust and healthy insurance population for the species. At present, Aussie Ark is working on enlarging its facility for the species and is hoping to welcome additional individuals in the coming months. By 2021, we will have nearly over 35 Brush-tailed rock-wallabies, equaling 1 wallaby per 11 hectares of sanctuary wilderness – and increase in the captive species’ population of 263%! Help support this species’ return to the wild by donating today.