Posted at 11:26h in Species by Craig Clark

The Long-nosed potoroo is one of the smallest and most ancient members of the kangaroo family and is a living fossil, having remained relatively unchanged for around 10 million years. Once widespread along the East Coast of Australia, and like many other smaller native mammals, its population has declined and fragmented since the introduction of foxes and cats, making it difficult for breeding and resulting in local extinctions. 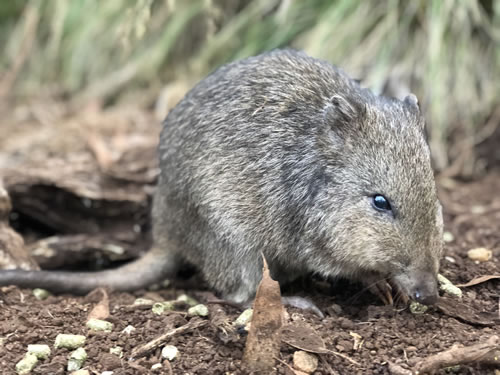 Adult Long-nosed potoroos can weigh up to 1kg and have a head and body length of about 360 mm and a tail length between 200 – 260 mm. Their fur is known for being greyish-brown above and light grey below. The upper body is brown to grey with a paler underbody and a long nose that tapers with a small patch of skin extending from the snout to the nose. The length of the feet is shorter than the head length. The species tends to have a 4-legged pottering motion, but when startled, hops like all other kangaroos. It has a life expectancy of around 5 to 6 years in the wild.

The Long-nosed potoroo is an ecosystem engineer, improving the health of the forest by dispersing a host of beneficial fungi spores as they forage and move around. These fungi, which form a major part of their diet, assist eucalypt and acacia trees absorb more water and nutrients and are essential for seedling survival. The Long-nosed potoroo also plays a key role in reducing the chance of fires by grazing undergrowth and turning over leaf litter.

Long-nosed potoroos utilise a wide variety of habitats including coastal heaths and both dry and wet sclerophyll forests. A dense understorey is essential for cover and eucalypt forests are important because potoroos rely on fungi associated with these trees.

The Long-nosed potoroo is now only found in isolated population pockets along coastal Victoria, New South Wales and into South-Eastern Queensland. The geographical separation of the populations brings a major threat to the ongoing survival of the species.

Potoroos are mainly nocturnal, resting during the day in nests made of leaves under dense cover. They use a range of micro-habitats for different behaviours such as feeding and sheltering. Long-nosed potoroos are solitary, except in captivity or when females have young and they are not territorial. They eat many types of roots, tubers, fruits, seeds, insects and larvae – all depending on seasonal availability. They often dig small holes in the ground in a similar way to bandicoots.

Long-nosed potoroos become sexually mature at around 12 months of age and give birth to a single young after a gestation period of 38 days. The young stays in the pouch for between 120- 130 days. After leaving the pouch, the young remain near the mother and still feed for about 40 days (weaned at 170 days). The species breed once or twice a year, depending on climate and habitat conditions.

Long-nosed potoroos are threatened by many processes including:

Aussie Ark is protecting the habitat of this unique eco-engineer on Aussie Ark’s sites by removing and managing stock and feral herbivores, conserving native vegetation, managing fire and controlling feral predators. Aussie Ark’s 400Ha Barrington Wildlife Sanctuary has been completed in late 2019 and the construction of a 500Ha sanctuary will begin in the near future. In the meantime, we are building an insurance population of Long-nosed potoroo in specialised facilities to ensure we have a robust and healthy population for eventual release into our sanctuaries, protected from unnatural predation. By 2021, we will have nearly over 373 Long-nosed potoroos, equaling 1 potoroo per hectare of sanctuary wilderness and increasing the captive potoroo’s population by 450%! You can help support this species’ future by donating today.