Posted at 11:37h in Species by Craig Clark 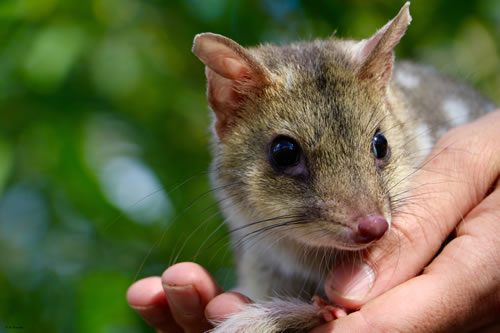 The eastern quoll is a medium-sized carnivorous dasyurid marsupial native to Australia. They once used to be common throughout Australia, but were declared extinct on the mainland in 1963 due to introduced feral predators and now only exist in Tasmania. Aussie Ark has identified the Eastern quoll as a key species as it plays an important role, scavenging on carrion on the forest floor and assist in maintaining balance within their ecosystem, as a natural predator.

Eastern quolls are slightly built with large sensitive ears and soft, thick fur. Small white spots cover the body except for the bushy tail which may have a white tip. It has two colour phases – ginger-brown or black, both with white spots on the body but not the tail.

Male eastern quolls are about the size of a small domestic cat averaging 60 cm in length and 1.3 kg in weight; females are slightly smaller. Distinguished from the larger Spotted-tailed quoll by the absence of spots on its tail, only four toes on hindfoot, and a less bulky head shape.

It is found in a variety of habitats including dry sclerophyll forest, scrub, heathland, alpine areas, however, it seems to prefer dry grassland and forest bounded by agricultural land, particularly where pasture grubs are common. Home ranges vary between the sexes and are dependent on habitat quality. In fertile habitats, females restrict their movements to a few hundred metres surrounding their dens if prey is plentiful. Males will often travel over a kilometre in a night, familiarising themselves with local mates.

The Eastern quoll once inhabited across most of Southeast Australia from the east coast of South Australia through Victoria and up to the Central Coast of NSW. It is believed that the Eastern quoll became extinct on the mainland in 1963 due to the introduction of the red fox and feral cats, yet they survive in Tasmania without these predators. 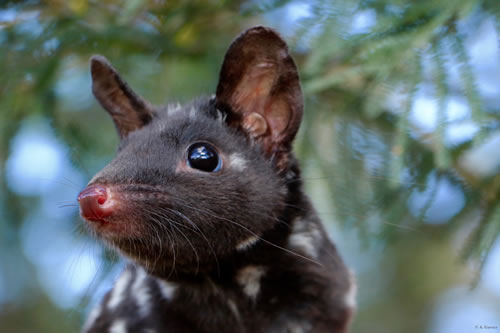 The Eastern quoll is largely solitary and nocturnal. During the day they sleep in nests made under rocks in underground burrows or fallen logs.

As a predator, Eastern quolls perform a valuable role. While the main component of their diet is spiders, cockroaches and grasshoppers, these small mammals are also impressive hunters. Their appetite for rabbits, mice and rats helps keep the populations of these pests under control and maintains a natural balance in the ecosystem, making their mainland extinction even sadder.

Breeding occurs in early winter. After a gestation period of 21 days, females give birth to up to 30 young. However, the pouch contains only six teats, limiting survival to first young which can attach themselves to these teats. After about 10 weeks, the young are left in grass-lined dens located in burrows or hollow logs leaving the female free to hunt and forage. If the female needs to move to a different den she carries the young along on her back.

Towards the end of November, when the young are 18 to 20 weeks old, they are weaned and become independent. Within the first year they have reached sexual maturity and begin breeding. As in spotted-tail quolls, the mortality rate of juveniles is low while they are in the care of their mother. However, after weaning they tend to move away and deaths of these small, inexperienced quolls increase.

Eastern quolls were once part of the Australian landscape for millions of years. The last Eastern quoll on the Australian mainland is thought to have been killed in 1963. The cause of their mainland extinction is attributed to feral cats, foxes, dogs, roadkill, poisoning and trapping. Across Tasmania, quoll numbers have declined by more than 50% in the 10 years to 2009 and are showing no sign of recovery. It is estimated more than 10,000 are left in Tasmania, but numbers have fallen rapidly. Eastern quolls are edging closer and closer to extinction, BUT it’s not too late.

Australia’s history is littered with examples where delays and inaction prevented small populations from recovering, with some species now lost forever. The Eastern quolls’ fate is not yet sealed. But we have to act now.

How Aussie Ark is Helping

Aussie Arks commitment to the conservation of Australian small Mammals, particularly those found along the Great Dividing Range, is unparalleled. Aussie Ark is the ONLY privatised conservation program that has vowed to bring this area back to its pre-European settlement state.