Posted at 11:30h in Species by Craig Clark 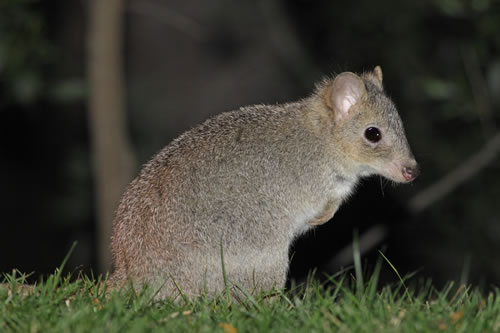 The Rufous rat-kangaroo (Aepyprymnus rufescens), more commonly known as the Rufous bettong, is a small marsupial species of the family Potoroidae found in Australia. It is found in coastal and subcoastal regions from Newcastle in New South Wales to Cooktown in Queensland and was formerly found in the Murray River Valley of New South Wales and Victoria.

The Rufous bettong is nocturnal. It is the only member of its genus and is the largest of all the potoroids. It is generally grey with a hint of reddish-brown – with its scientific name meaning “reddish high-rump”. It was once thought of as a solitary and nocturnal animal, but recent observation indicates that the Rufous bettong may form loose, polygynous associations.

Rufous bettongs are small marsupials, ranging from 70 to 80 cm long from nose to tail. They have reddish-brown fur, including on the muzzle. They normally move quite slowly by placing the forelegs on the ground and bringing the hind legs forward together, but can also hop like a kangaroo. When alarmed they stamp their hind feet on the ground. They are known to use their tails to carry nesting material and are a secretive nocturnal animal. It is rarely seen in the wild.

The species can be found in a variety of habitats with a sparse or grassy understorey. These habitats range from coastal eucalypt forests, wet sclerophyll forests to low, dry and open woodland west of the Great Dividing Range.

The species originally ranged from Coen in North Queensland to Central Victoria and has now been reduced to a patchy distribution from Cooktown in Queensland to North-Eastern NSW, as far South of the Mount Royal National Park. In NSW, it has largely vanished from inland areas but there are patchy, unconfirmed records from the Pilliga and Torrington districts.

Rufous bettongs usually emerge shortly after dark to forage and primarily eat herbs, roots, tubers and fungi. They can cover up to 2km – 4.5km a night when foraging. The Rufous bettong is a solitary species that shelters during the day in ‘nests’, more so shallow excavations with a dome of fibrous vegetation across the top and a single entrance. Multiple nests are often used by the same individual.

Females are continuous breeders, with sexual maturity reached at about 11 months. Females raise one young per pregnancy, but exhibit embryonic diapause and can have 3-4 young per year. Bettongs, like bandicoots, are important ecological engineers. Their digging plays an important role in the decomposition of leaf litter, thereby reducing fuel loads and fire risk in dry grassy forests and woodlands, and in dispersing fungal spores and plant seeds. Rufous bettongs, for example, can travel 1.5km from their nest to feed – a large distance for a small mammal – spreading spores and seeds via their scats, snouts and paws as they move about the landscape.

Bettongs have suffered significant declines in their natural distribution following the expansion of agriculture and the introduction of feral cats and foxes, as well as;

Aussie Ark is protecting wild areas inhabited by Rufous bettongs by removing and managing stock and feral herbivores, conserving native vegetation, managing fire and controlling feral predators. Currently, we are building an insurance population for the Rufous bettong in specialised facilities to ensure we have a robust and healthy population for eventual release into our 400Ha Barrington Wildlife Sanctuary, protected from unnatural predation. Aussie Ark hopes that in the near future, our bettongs will call our sanctuary home. You can help protect this species’ future by donating today.