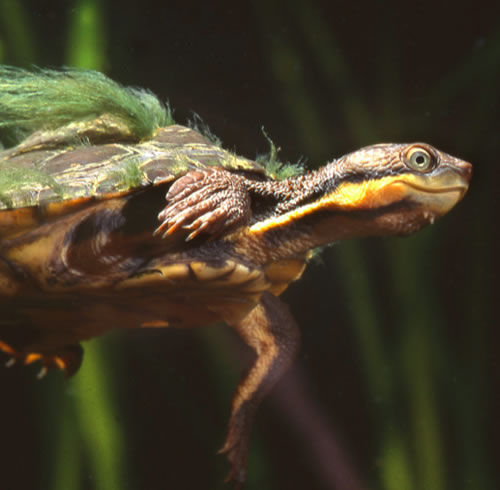 This striking medium-sized freshwater turtle is recognised by its distinct colouring. The Manning River turtle is known for its yellow markings on the underside of its shell and tail, as well as a clear yellow stripe from the jaw down to the neck of the shell.

The Manning River helmeted turtle is found only on the Mid North Coast of NSW, more particularly, the species is restricted to the middle and upper stretches of the Manning River catchment area. They are found in relatively shallow, clear, continuously fast-flowing rivers with rocky and sandy substrates.

This species is predominately diurnal, often seen basking on logs, rocks or the river banks near deep pools. Although, nocturnal foraging in shallow areas has been observed. The Manning River turtle is thought to be omnivorous like similar turtle species. It is estimated that this turtle species has a lifespan of approximately 20 years.

Unfortunately, in recent years the Manning River helmeted turtle has seen a significant decline in numbers, although the full extent is not known. The species faces a range of threats, including predation, illegal poaching, habitat degradation and disease. Foxes not only raid the nests and eat the eggs and young turtles but also the mothers as they are laying them on the river bank. These threats have all drastically reduced the number of surviving individuals and have also left the wild population vulnerable to mass extinction in the face of any catastrophic event that may occur. Water quality, food availability and suitable nesting environments are likely to also have been affected by human use of the land in adjoining areas, causing environmental changes.

For many Australian species, action is taken too late, with populations reduced to a level where genetic diversity is reduced. Their ecological role has already diminished and collection is impactful and challenging, let alone the establishment in captivity of a robust and successful insurance population.  Once they are gone, nothing we do will ever bring them back.

The Australian Reptile Park and Aussie Ark have joined forces to save this species. Australian freshwater turtles live in a fragile and niche environment. In the case of the Manning River turtle, they require clean, flowing substantial bodies of water to thrive. For a captive insurance population to be established, specialised facilities are required to enable a population to thrive.

Aussie Ark has a proven model in establishing robust and healthy insurance populations. Utilising this knowledge and the husbandry expertise of the Australian Reptile Park, we are able to change the trajectory of this unique Australian species.

The Aussie Ark facility has been completed on the Australian Reptile Park’s site and is environmentally and climatically perfect due to its proximity to the wild distribution of the species. A strong and healthy insurance population has since  been established and both organisation saw the hatching of over a dozen Manning River turtle in mid-2020. This captive insurance population is providing protection for the species well into the future.

Additionally, in partnership with the NSW Office of Environment and Heritage, Aussie Ark has been conducting ongoing in-situ population surveys to monitor the status of the wild population, protect nesting sites and land management activities within their natural habitat. In late 2020 and early 2021, Aussie Ark will also conduct wild translocation from the captive facility to areas the turtles were formally found to bolster wild populations, and ensure the species remains ecologically functional while further wild solutions are addressed and implemented. You can help create a future for this species by donating today.