Posted at 05:08h in Species by Craig Clark 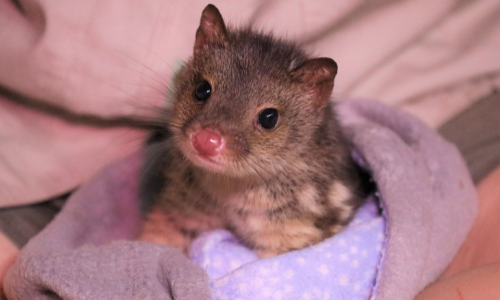 The Spotted-tailed quoll is the closest living relative to the Tasmanian devil, and one of the last remaining predators within its environment thus playing a critical role within the ecosystem.

The Spotted-tailed Quoll population is seriously threatened throughout mainland Australia and these marsupials are rarely seen in Sydney. The introduction of feral animals such as foxes, cats and dogs, as well as diseases and the destruction of their forest habitats, have greatly reduced their numbers.

The Spotted-tailed Quoll is a nocturnal, cat-sized, carnivorous marsupial with reddish-brown fur. It has distinctive white spots over its back and tail.

The Spotted-tailed Quoll is found in Queensland, New South Wales, Victoria and Tasmania.

At night, this solitary animal hunts and feeds on a variety of prey including birds, medium-sized mammals and reptiles, which it attacks by biting the back of the skull or neck. 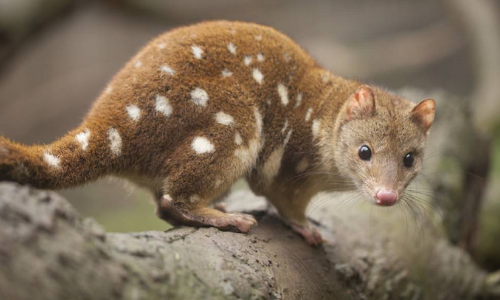 Spotted-tailed Quolls are solitary however, both males and females mate with multiple partners during their brief autumn and winter breeding period. Spotted-tailed quolls have a single litter of up to 6 young each year, born between May and August. Each litter is sired by more than one father. Young are carried in a rudimentary pouch and, when they become too large, they are left behind in a nursery den while the mother forages. Young quolls become independent at about 100 days old.

This species was severely affected by fire in 2019-2020 Australian bushfires, as a large portion of its habitat was burnt. Burnt landscapes have been shown to expose these quolls to a higher risk of predation by feral predators. The species is suffering significant decline due to habitat fragmentation, but mainly fox, cat, and domestic dog predation. Many native animals, including the Spotted-tail Quoll are struggling to survive. Action must be taken now to protect their tomorrow.

Aussie Ark, established ten years ago, has been working towards rewilding Australia by returning missing species and rebuilding Australian ecosystems. The conservation organisation is committed to returning their sanctuaries to that of pre – European settlement. Aussie Ark will help Spotted-tailed Quolls by creating a robust insurance population, to ensure a long-term future. You can help support this species’ future by donating today.