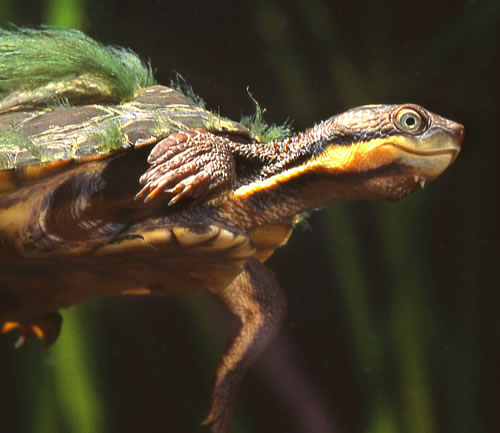 Aussie Ark dives in to save Manning River turtle!

Freshwater turtles are natures vacuums. By cleaning up our beautiful river systems, keeping aquatic vegetation in balance, and maintaining the stunning waterways we are so proud of, they are critical to our freshwater ecosystems!

Out of the 7 freshwater turtles found in NSW, 2 are endemic meaning they are only found here, and sadly BOTH are endangered!

Predation is a key threat to this amazing little turtle, with the introduced feral fox and feral pig the primary threats. They feed on eggs, young turtles, and even mothers as they lay their eggs in nests on the river’s bank! According to the NSW Scientific Committee, similar turtle species’ nest sites in the area have been predated by up to 90%. Other threats including degradation of habitat, human interference and poaching are cited as reasons for the decline in the turtle population.

Emergency intervention is required to house an insurance population to safeguard the future of the species.

The Manning River turtle is distinguished from other species by its yellow markings on the neck, carapace and tail. This striking turtle is endemic to the Mid North Coast of New South Wales (NSW) and is restricted to the middle and upper stretches of the Manning River catchment area – it isn’t found anywhere else on Earth! Being more than 55 million years old, this amazing critter is perhaps the oldest turtle in Australia and has been called a living fossil.

For many Australian species, action is taken too late. Often populations are reduced to a level where genetic diversity is irrevocably reduced. Often by this stage, the establishment of a robust and genetically diverse insurance population is no longer viable, or highly problematic at best. There is a need to act now in a proactive manner, prior to any further decline.

The Australian Reptile Park and Aussie Ark have joined forces to save this species.

Aussie Ark launched a Crowdfunding campaign in August 2019 to raise $110,000, and with your help we made it! We are so proud of the support that this little turtle has received and have been hard at work since then to build specialised facilities to establish an insurance population!

The construction of a purpose-built facility containing 10 breeding ponds at the Australian Reptile Park was finalised in 2019 and Aussie Ark’s team will continue to collect individuals all throughout 2021. The clock is ticking for this species, and because of your swift action, the Manning River turtle now has a better chance of survival!

We are also focused on in-situ works to monitor the species, restore nesting sites, and collect individuals destined to become founders for the insurance population!

You can help the Manning River turtle project in the following ways:

You can help provide ongoing support to our freshwater turtles and secure a safe future for them to thrive.