Posted at 13:25h in Projects by Craig Clark

The #DevilComeback is a historic effort to return the iconic Tasmanian Devil to mainland Australia for the first time in 3,000 years through the collaborative work of Aussie Ark, Re:wild and Wild Ark.

This first historic release is only step one in our mission to rewild Australia and bring balance to the bush. Aussie Ark and our partners are committed to returning Australia’s ecosystems to that of pre European settlement, free from introduced feral predators – an island oasis.  We need YOUR help. Aussie Ark relies solely on donation of funds to be able to restore Australia’s ecosystems, without you Aussie Ark cannot continue to deliver brighter futures for Australian native wildlife. Donate today for their tomorrow.

Aussie Ark have worked tirelessly over the past decade to build an insurance population of the endangered species. To date, more than 390 devils have been born and raised at Aussie Ark in a way that fosters natural behaviour in the animals, preparing them for release into the wild. Aussie Arks ‘Rewild Australia’ strategy is a key component, alongside Species and habitat recovery, in returning Australia to it pre-European state.

This year, 26 Tasmanian devils were released into a 400-hectare wild sanctuary. In the next two years, Aussie Ark plans two additional releases of 20 devils each. If all goes as planned, the animals will breed and produce joeys, eventually resulting in a self-sustaining wild population.

Not only does the reintroduction bode well for the recovery of the Tasmanian devil, but as native apex predators and the world’s largest carnivorous marsupials, they help control feral cats and foxes that threaten other endangered and endemic species. As scavengers, they help keep their home clean and free of disease. Their return to the wild therefore establishes the foundation for an ambitious vision to rewild Australia.

Tasmanian devils vanished entirely from mainland Australia in large part because they were outcompeted by introduced dingoes, which hunt in packs. The devils survived only on the island of Tasmania, where the Dingoes never reached. Across the island state, a transmissible, painful and fatal disease called Devil Facial Tumour Disease (DFTD)—the only known contagious cancer—decimated up to 90 percent of the wild population of Tasmanian devils. Just 25,000 devils are left in the wild of Tasmania today.

“In 100 years, we are going to be looking back at this day as the day that set in motion the ecological restoration of an entire country,” Tim Faulkner, Aussie Ark President.

Aussie Ark’s Tasmanian devil breeding program is the most successful conservation breeding facility for the endangered species on mainland Australia. At its founding, the program started with 44 individuals and today is home to more than 200—which equals about 50 percent of the entire mainland insurance population. To date, more than 390 devils have been born and raised at Aussie Ark in a way that encourages and fosters natural behaviour in the animals, helping to ensure that they maintain all the skills they need to survive in the wild.

“This is an incredible example of how to rewild our planet, bringing back the natural systems to the benefit of all life on Earth.” Don Church, Re:wild President.

This is the first of three planned reintroductions. In the next two years, Aussie Ark will do two additional releases of 20 devils each. The animals will be monitored through regular surveys, radio collars fit with transmitters, and camera traps. This will give the researchers the opportunity to learn about how the devils are faring, where they are claiming territory, what challenges they are facing, what they are eating, and whether they’re reproducing. All of this information will help to inform future releases, including in Tasmania and elsewhere on the mainland, to continually refine the process. 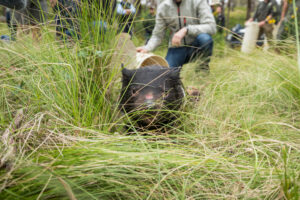 “The re-introduction of devils to mainland Australia is a game-changer for conservation” Mark Hutchinson Co-Founder WildArk.

As a not for profit organisation, Aussie Ark raises the necessary funds to continue its ambitious vision. Investment allows for the construction of captive facilities and predator-proof fencing on semi-wild parcels of land. Aussie Ark is a registered environmental organisation and charitable institution under the Australian Charity and Not-for-Profit Commission. Aussie Ark has deductible gift recipient status (DGR status) and is registered for GST purposes.

WildArk is a global not-for-profit conservation effort that was founded in 2016. Our mission is to promote and support activities that educate, enable, provide resources or inspire humanity to sustainably conserve, protect or restore the environment and the world’s ecosystems, natural resources, wildlife and wild places. The mission is manifested through positive storytelling, scientific research, supporting wildlife conservation and investing in space for the wild.  Learn more here.